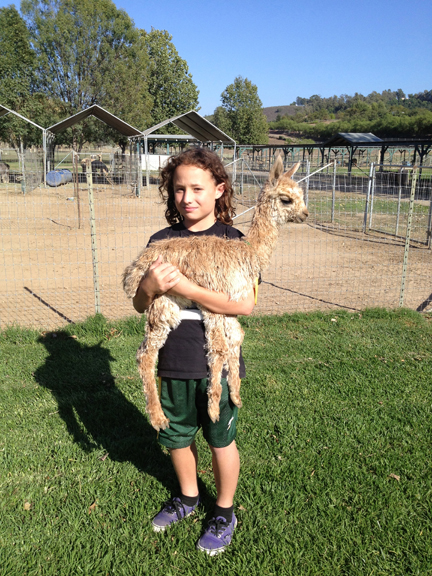 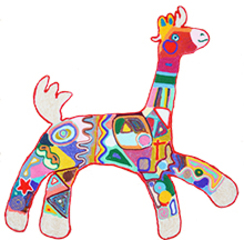 Well, Miracle has graduated. She has become a full-fledged alpaca. She's completely sold out to the idea. Unlike some crias who are bottle-fed, Miracle never really wanted to be a human, nor did she ever think we were alpacas. She knew that she needed humans because they brought her bottle, but she never gave up hope that someday a real alpaca mommy would come along.

Now and then we put her together with a nursing dam we thought might adopt Miracle. Being a survivor and an opportunist, our girl scampered across the pen and dove immediately for the milk bar. She was not shy or apologetic about it at all! Usually she would get a few sips for her efforts before she was discovered to be an interloper, but in the end the other moms were always determined to keep their nursing exclusive to their own cria. She was disappointed, but continued to take her bottle eagerly the next time. We found that a combination of whole cows milk mixed with plain yogurt was a good match for her digestive system, so fortunately we had no gastrointestinal challenges along the way.

As a supplement at night, we began putting out Calf Manna pellets for her, and she nibbled at first, then began to look forward to them. It wasn't long before we saw her actually eating hay as well. At first it was just "monkey see monkey do" to be like the alpacas we kept in the next pen, but there was a point at which we could tell she was actually chewing and eating the orchard grass. She spent lots of time digging around in the feeder for the most tender morsels she could find.

One night Miracle had a new game to play when we came with the bottle. She had become the "Gingerbread Girl", pronking around the pen, taunting "Can't catch me! Can't catch me!" It was a bittersweet moment, one that every parent (human and alpaca) faces-- the beginning of true independence, both behaviorally and nutritionally. It wasn't long before she seemed confused about whether she should suck on or chew on the rubber nipple. Our little girl was growing up!

At 4 1/2 months and 52 lbs, Miracle lost almost all interest in her bottle. She loved Calf Manna, regular alpaca pellets, and hay. She still got excited when she saw us coming, but wanted to run and play rather than nurse. We began halter training her in preparation for the day we would take her out to a real pasture to be a "real" alpaca.

On a Saturday in January when several of her human friends were here, we haltered Miracle and began the Pomp and Circumstance march to her new pasture. It was Graduation Day for the little girl who had fought so hard to live. We all laughed as she danced down the row on her little green halter, spooking at unseen surprises, running ahead of us, eager to see what was next.


Kate led her into Pasture 7--the young girls' pasture. Miracle could hardly contain herself! Although she had been taught to stand still until released after the halter came off, she leaped out of Kate's grasp as soon as she felt the buckle give way! She couldn't wait another second to run in the wide open spaces! It's fairly normal for the newest member of a pasture to be inspected by the herd, and although all the girls came to sniff who she was, Miracle was just as eager to greet and sniff them. They chased her--she chased them. It was a merry chase all around!

With a tear in our eye we all left her with her new family. She didn't even see us go. That is what we wanted her to do, after all-- to assimilate seamlessly into the herd. Secretly I think we all hoped that she might hesitate, look around, wave goodbye, smile, say she would miss us…. It's really impossible not to anthropomorphize these adorable creatures, no matter how hard you try, especially when you've spent a lot of time, effort, and prayer on them.

Later that day we returned to her new pasture just to be sure all was well. And it was. Miracle came away from the crowd at the feeders that evening to say hello, but it was the way an alpaca says hello-- curious to see if we brought her anything, standing just out of reach. We patted ourselves on the back, swallowing the lumps in our throats. We had worked hard for this. We were all successful--human and alpaca. 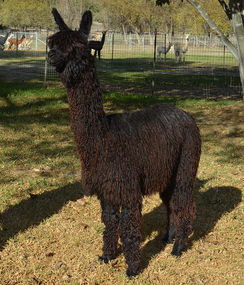