The End in the Beginning 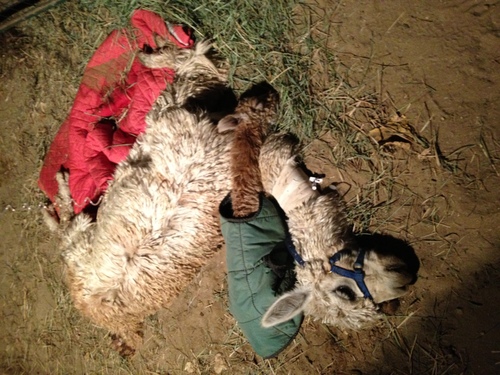 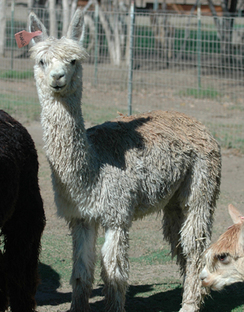 I found them this morning, keeping each other warm in the predawn. Maria lay on her side, the coil set from the IV fluids stretched across the pen, still securely attached to her neck wrap. The cria lay across her body at the base of her neck, sound asleep, like a tableau from a Greek tragedy. The slight rise and fall of her tiny chest told me she was sleeping deeply. The absolute stillness of her mother told me that Maria slept a different kind of sleep.

It would be unfair to leave the story unfinished. Tuesday's triumphant and miraculous birth was a story that was almost too good to be true. And as those stories sometimes do, it gave way to tragedy this morning.

Do you remember the movie, "Old Yeller", where the fierce and heroic dog saves his adopted family from a rabid wolf at the bonfire? Travis' mother insists that they keep Old Yeller in the corn crib for two weeks just in case the wolf had bitten him and given him the dreaded "hydrophoby". Fourteen days later the tension in the music builds as an impatient younger brother, Arlis, creeps out to let the dog loose so he can play with his best friend. Mama and Travis arrive just in time to keep the snarling monster bay. All is lost. Old Yeller is doomed… Actually, he had been all along--we just couldn't see it before.

The seeds of Maria's tragedy began even as Tuesday's triumphant birth played itself out. Despite antibiotics, banamine, a clean uterine flush Wednesday morning, normal vital signs and normal behavior, we were losing Maria all along. I knew it when I came out to check on them after dinner. She had been up almost all day, waiting patiently while her baby learned to nurse. But as dusk descended, she lay in the corner of her pen with her head stretched out in front of her, too tired to stand.

The sobbing started somewhere deep in my gut. I heard it before I realized it was me…such an unearthly sound, the kind of crying that links us all in a chain where we feel each other's suffering. After yesterday's elation, I was once again breathless, but this time with the knowledge of the death that was yet to come. Nonetheless I called Dr. Jana. I couldn't just let Maria fade away without some tangible proof that there was no other path to be followed.

For the second time in as many days Dr. Jana pulled her car into the yard. She took a blood sample and did a thorough exam. Everything seemed normal except her potassium. Hoping to correct it with fluids, we set her up with an IV drip in a small pen where her baby could be with her.

People often ask, "What's the down side of this business?" I have to say, this is it. We raise them from itty bitty crias to adults who go on to have crias of their own; watch them, love them, monitor their nutrition, their pregnancies, help birth their babies… and then something like this comes along. I usually have pretty good boundaries with my alpacas. I can even sell most of them. But when I have to do intensive nursing care because one of them is really sick, all those boundaries crumble. I can't help it. I wanted her to get well, to nurse her baby, to go on to have another one someday.

But instead, I watched her slip further and further away through the night, until at 4 AM she lay still. It was almost anti-climactic. I had known death was coming all night. But I don't think anything ever prepares us for the actual moment that life ends, the realization that the soul of one who was with us is just… gone. I felt an emptiness because I had hoped it could be different.

As I stood there letting reality settle in, the cria let out a loud sigh, as if to remind me that all was not lost--her little life had just begun. And she was going to need some help! It was comforting to be reminded of the "circle of life". Maria would live on in her cria, and I would now have a much bigger role in this cria's life, so I better get busy and warm up a bottle! Tomorrow, as Scarlett O'Hara would say, is another day.
Featured Items 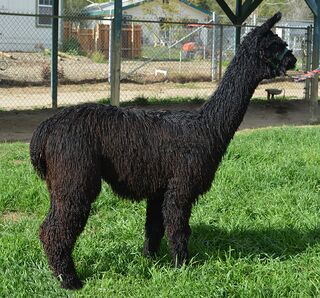 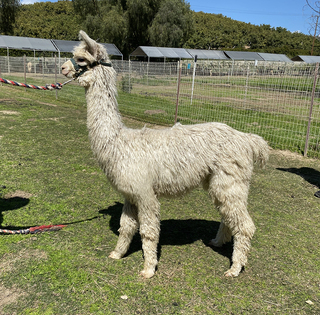