The Southwest Regional Show was a Hoot! 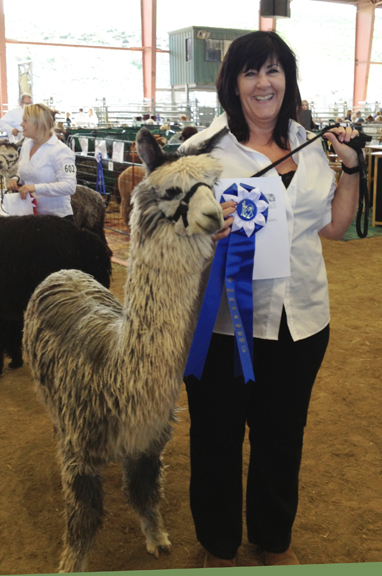 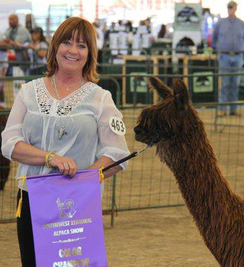 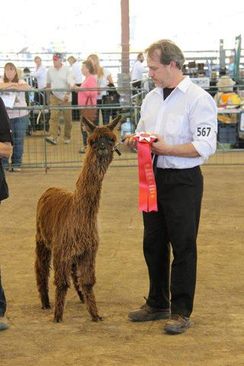 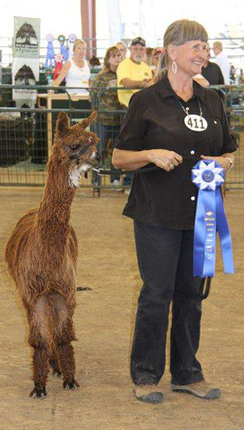 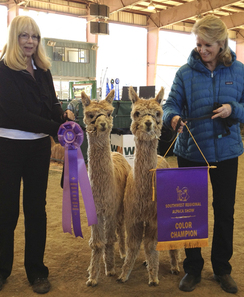 Lynette Halverson with our Golden Sun

What a fun weekend we had at the Southwest Regional Alpaca Show in Norco last weekend! It was the first time the show has been to California, and I would call it an unmitigated success. Kudoes to SoCalpaca and ABA! The venue was fantastic, access was easy, and the town of Norco was very supportive.
We had a great bluegrass band at the banquet Saturday night, too!

It's rare that you have so much of the public visit the show, but the marketing team really got the townspeople curious, so lots of them came to see us. It was so nice to visit with so many of you who came to find out just what an alpaca is and WHY you would want one!

And our Windy Hill Community came home with some really impressive ribbons:
Moonlight took a first in the gray yearling suri class.
Franklin and Billy the Kidd took first and 2nd in the brown juvenile male class.
Tossin' and Turnin' took 1st in the brown yearling female, never shorn class.
Huracan "captured the flag" in the brown yearling female division! Woo hoo--Tracy's first championship!
Veyron took 1st in the indefinite dark mature male class.
And Apache's Golden Sun took the Reserve Championship in the fawn male division-- Lynette's first championship! Yeehaw!!
Torbio won Get of Sire for suris, posthumously. I know he's smiling on the other side of the Rainbow Bridge.
And Windy Hill ended up with the Best Yearling Bred and Owned Suri Female AND Male at the show!
Altogether a fantastic show for all of us!

And a big thank you to Phyllis Walker and Nancy Frederick of PacaShack for doing the driving, the loading and unloading and set-up! Wow--what a burden off for me with my shoulder out of whack.

Our next show is the International Alpaca Odyssey in Sacramento at CalExpo on March 16-17. Then we're back to northern California for the California Classic in Pleasanton on April 13-14. Come on out and see us there if you are in the area. We'll have some of the really neat little kids with us who weren't old enough to go out this time by the time we get to Pleasanton. It'll be a fun time, for sure.

Take a look at our little film from the SWRAS on YouTube: http://www.youtube.com/watch?v=BwzrcJ5hrss

And come on out to see us soon. Here's a link to our newest Newsletter Flyer: