Simplest Thing, There Isn't Much To It... 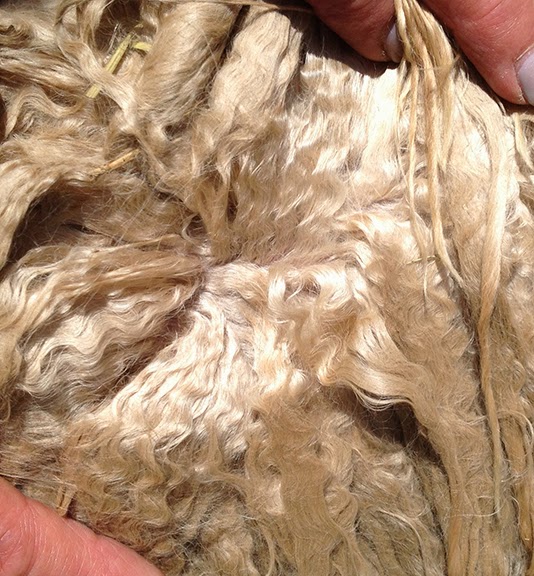 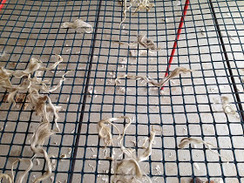 Those little pieces shaken out of the skirted fleece, both on the table and on the floor. 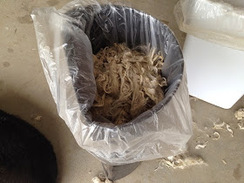 The Mush Pot full of "skirtings" 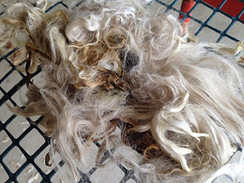 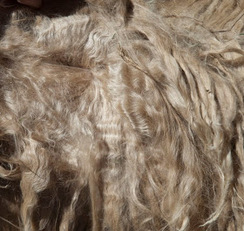 Michelle's fleece, ready to be skirted.

Skirting is a dream come true… especially if you love alpaca fleece AND happen to be ADD with a little OCD thrown in for good measure. I just love to dump a fleece out of the bag onto the skirting table and take a good look at it. I learn a lot about my breeding program by skirting fleeces. Yes, it’s time-consuming, pains-taking, and it can even cause you to lose your perspective after you’ve done 10 or 12 of them. But it’s worth every minute.

Every fleece has its own character. Sometimes it takes me a few minutes of handling a fleece to figure it out. I try to lay it out on the skirting table like it came off the alpaca. This can be a challenge-to-impossible if it’s a cria fleece that falls out of the bag like so many shining little “worms”. I try to get a feel for where the outside edge of the blanket is. With a suri you will sometimes see the fleece coarsen slightly and lose luster around the outside edges. I remove that ring of fleece first. Then I go back and try to capture the stray pieces of hay, sticks, straw, dingleberries and unidentifiables. After that’s done, the rest is usually pretty good.

When I was a kid I learned that there is a song for just about every event in life, from the grand moments to the minutia of life. Skirting is no exception, and pretty soon I was in my own little world, mindlessly singing snatches of camp songs while I obsessed over yet another cria fleece. Fortunately today Juan’s crew was weed-whacking and Annie the Border Collie was pleading with Kate—at the top of her voice— to come rescue her from the yard, so no one heard my little ditties in the barn….

“Simplest thing, there isn’t much to it,
All you gotta do is doodlie-do it….”

As I finish each section of the blanket, I pick it up in a loose ball and shake vigorously, letting the tiny little bits and tags of fleece caught in the mass fall like snowflakes to the surface of the net. Some of them are so small that I would never find them otherwise. When that is the case, they can sneak past the mill as well and end up as little balls of fiber in my roving, or worse yet, in my yarn. Our shearers have been very good the last 3 years about avoiding the dreaded “2nd cuts” as they shear. The one shearing the blanket has the task of making sure that he doesn’t go back over the edge of the previous pass as he starts a new one. If he can remember to leave just the slightest bit of space between passes, then those little short pieces don’t end up in the blanket. The better the shearer, the fewer the 2nd cuts in the bag.

What did I do with the fiber I extracted from the edge of the blanket? I put it in a bin of “skirtings”, otherwise known as the Mush Pot. These are not 2nd’s, such as neck and leg. They are merely the parts of the blanket that are not as nice as the prime fleece, and hopefully there isn’t much of it. Sometimes there are wonderful twisted locks in that lot, good for craft projects later. It also makes wonderful rug yarn—not as much guard hair as the 2nd’s—and it can be dyed and used as needle-felting projects. There are all kinds of uses for “skirtings”.

One of these days I plan to take a course in sorting so that I understand the difference between the grades of fleece. In the meantime, I am looking for obvious differences within the blanket and separating them. You know you have a consistent fleece when there is hardly anything to remove from the blanket except hay. And the denser and more uniform the fleece is, the less junk you find in it. It’s amazing. A more open fleece is more “hospitable” to debris.

When I am finished with a fleece, I have a bag of exquisite blanket to be spun, some really stained or dirty stuff in the trash bin to go in the compost, and a bag of skirtings, the use of which I will determine later when inspiration strikes.


For more information on skirting, fleeces for sale, and suris, please complete the form HERE 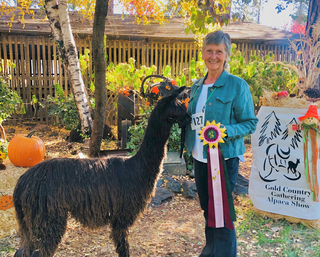