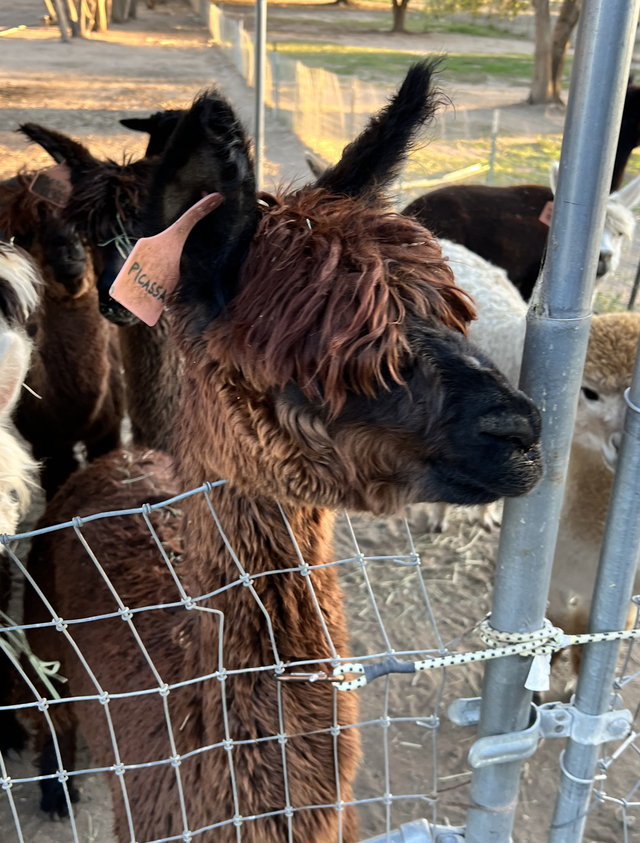 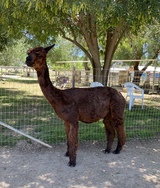 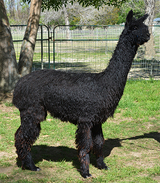 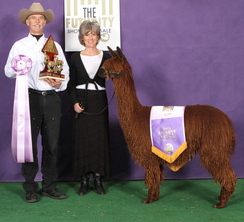 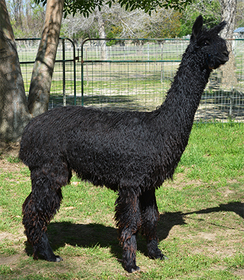 AWH Sniper's The Shadow is a true black, "true blue" son of Sierra Bonita's Peruvian Sniper. He is shiny and so black he sometimes flashes blue in the sunlight. I pulled his fleece out to prepare it for processing and was immediately reminded of why I love this male so much! His fleece is heavy and black with no white fibers. It is also extremely lustrous with that wonderful depth of luster that is almost fiery. Combine those traits with a handle that reminds me of running my finger acr ...
More Details
Sold

Ask a question
Details
Certificate
Eventyrgaard's Picassa is one of those adorable girls who is always in your business, even when she is pregnant. She is almost always the first one to the fence, even when there is no food involved! Her lustrous maroon fleece is a beautiful sight running, fleece flying, to be first in line.

Picassa's sire is the famous GLR Picasso. Picasso is well-known for his deep mahogany fleece and his stellar show record. His color is my favorite color, especially in shiny suri. Picassa represents him well.

Picassa's dam is Summerlin's Lucy, a daughter of Captain Morgan, and carries his stunning maroon color-- you know, the dark reddish brown that flashes blue in the late afternoon sun. Lucy brings with her an amazing personality. She is quick to come see you in the pasture and VERY fond of treats. Picassa comes by this trait naturally.

Picassa is bred this year to Sniper's The Shadow. Shadow has high luster and a great temperament. His luster carries into his offspring and so does his gentle temperament. It should be a stellar match, both with his mom's temperament and dad's strength and depth of color. We can't wait to see this baby!
Purchase Terms