The Shadow at almost 2, 3rd fleece 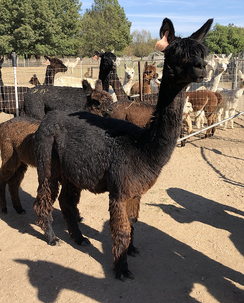 $1500.00
Ask a question
Details
Certificate
AWH Sniper's The Shadow is a true black, "true blue" son of Sierra Bonita's Peruvian Sniper.
He is shiny and so black he sometimes flashes blue in the sunlight.

I pulled his fleece out to prepare it for processing and was immediately reminded of why I love this male so much! His fleece is heavy and black with no white fibers. It is also extremely lustrous with that wonderful depth of luster that is almost fiery. Combine those traits with a handle that reminds me of running my finger across clean glass, and you have a fleece to be envied anywhere.

His compact frame is right "in the box"-- square and correct in all proportions.

The Shadow's pedigree is awesome. His sire, Sierra Bonita's Peruvian Sniper, took first and either Champion or Reserve Champion in every show he entered. Sniper is the son of the incomparable DDF Peruvian MacGyver, who changed the face of colored suri across the US. Sniper showed with his 1/2 brother, Sierra Bonita's MacGyver's Sirius Black, also a force to be reckoned with.

AWH The Shadow has his first babies on the ground this summer. So far we have 1 female cria--black, shiny and adorable.
Come see his crias and book your breeding to AWH The Shadow!
Awards